The duality of the perfect punch – striking martial arts 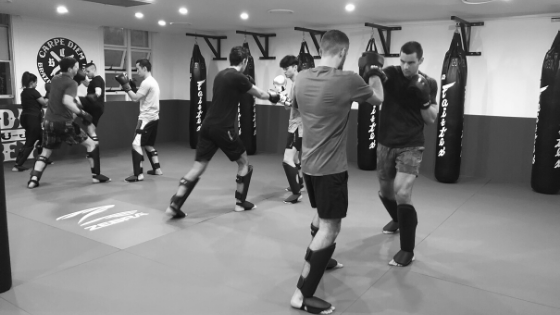 Striking martial arts as an expression of functional training

Looking around at most fitness gyms today you will find most offer some form of boxing, kickboxing or MMA in their striking martial arts schedules. Even Crossfit has just introduced an MMA curriculum to their routine. Is this just to cater to the current trend of martial arts that is sweeping the world? Is it purely the cardio element of hitting pads and bags that is the appeal? Maybe it’s both these points as they are both valid for fitness and the industry.

Coming from a traditional martial arts background and using Functional Fitness elements in my training sessions, for me using martial arts training for fitness is a practical tool.

In Functional Training we cover strength, movement, mobility/flexibility, power, cardio and address weaknesses in the body. We use pushes, pulls, squats, lunges and twists and move over different planes to cover all areas. Most importantly we train our bodies to utilise it’s mechanics in a cohesive, natural and… well, functional manner to get the most out of it and work as one optimal unit. But how functional are you and how can you measure that function? Hitting something is the ultimate chance to assess and express what state your body is in, how you have been training and how it functions together as a complete machine.

As an instructor what I find most interesting teaching total beginners how to punch is the difference in training men and women. Take two beginners male and female, give them instruction on how to punch and ask them to hit something as hard as they can. Generally, the male will hit harder but most of the time he will be relying on maximal strength, particularly in the arm. The female on the other hand quite often will not match that strength physically but will instinctively be more technical using more of her body mechanics and will actually get even more technical over time. She will improve faster technically. The male on the other hand will usually regress technically before improving (Especially when you’re egging him on to hit harder) as the harder he tries to hit the less powerful his punch actually becomes.

Of course I’m generalising but my point is that a perfect punch is more than just pure strength. It is all of the elements of our functional training combined with the proper technique of a punch focused on one point at one single moment. The irony is that we need strength as a base for most athletic functions including striking but a good strike isn’t just about maximal strength.

A few years ago Marius Pudianowski a 5 time Worlds Strongest Man champion embarked on a MMA career. An absolute beast and muscular specimen, it could easily be assumed Marius’ sheer strength would overpower anyone crazy enough to step in front of him. It wasn’t as clear cut as that. Marius’ bulk actually made him stiff and his stamina was affected early in the fights. The physical attributes he had became handicaps making his striking technique sloppy, slow and rigid. His strength when it came to striking was almost useless to him. It took a couple of years but in his last few fights Marius has obviously dropped some bulk and his striking technique improved dramatically. His last fight was a one punch knockout and an example of applying his strength and power with better body mechanics. Strength and size still apply to a strike but there needs to be technique, speed and mobility to utilise it properly.

As a striking martial arts trainer

As a trainer I love the challenge of finding the most power I can get out of my students striking. I call it extraction. Extraction implies working at something with effort to get a valuable commodity. Extracting every bit of power out of what one has available to them is my job. Striking power is all about combining our base strength with body mechanics and connecting ourselves to the earth utilising gravity as a tool. Have you ever tried throwing a punch or kick suspended in water or floating in the air. There is significantly less power generated as there is no grounding. These are the elements that make up a perfect strike and helping students combine them in one fluid movement for a split second is my goal as a striking coach.

Power in striking is very much like a hose. No matter how much water is pushed through a hose if there is a hole somewhere along the line less water will come out of the end. If there is a kink in the hose the water won’t get through. Are you pivoting your forefoot enough? Are you tensing up your shoulders too much? Do you have an injury that is giving you less mobility? Are you missing a pinky finger? All these points will affect the perfect strike just like leaks or folds in a hose. They are leaks of power in your body.

As you can see there are so many technical elements that make up a strike but at the same time differences in any of these things will make it “your” individual punch. This is an expression of your body as no one’s body is the same and the ‘Art’ in Martial Arts. The ultimate aim of martial arts is not to achieve perfection but the path of striving to achieve it. Being better today than yesterday. Attempting to control every single part of your body exactly when you need to. Mastering your body after all is the first step in mastering yourself. Functional Training is training that addresses all of the above physical elements for fitness and also help us to master our own bodies. We can even test each individual component in its own way to see improvements or regressions. But how can we test every component in one pure action at the same time? Hitting something!

A punch however is only as strong as its weakest link so use boxing/kickboxing training to not just gauge how hard you hit but more importantly to determine where your weaknesses lie. Any weaknesses or breakdown in the mechanics of your body will be exposed but the payoff with perfect extraction is the satisfaction in hitting a pad sweetly, the swing of a bag or seeing an opponent wince under the power of your perfect punch.